I love making bread and wanted to try something new so when I saw a recipe for Rum Raisin Bread I immediately thought I would make it.  Then I had to determine how I was going to serve it to our guests here at the inn – as buttered toast, french toast, strata, what?  A friend had just posted a photo on Facebook of the stuffed french toast she serves to her B&B guests.  I thought this was the answer to my question.

So I set about making the bread.  While the dough was proofing and rising I played around with what I was going to fill the french toast.  I looked in the fridge and noticed I had cream cheese and whipping cream .  So out came the hand mixer and I started whipping the cream and the cheese together, adding vanilla bean paste and confectioners sugar as well.

The next morning I sliced the bread and slathered on the cream filling.  Put two slices together and dipped them into an eggy cinnamon custard.  Then fried the french toast in local butter, topped them with strawberries from the local strawberry patch and proudly served them to guests with some warm maple syrup.

The plates all came back to the kitchen empty.  We hope you enjoy them as well. 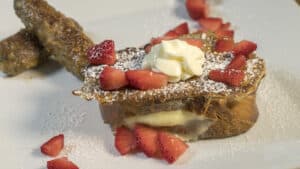 Combine the water, raisins and extract in a glass bowl and let sit for at least 30 minutes to re-hydrate the raisins.

Put the remaining ingredients into the bowl of a stand mixer (or large bowl if mixing by hand). Mix until a soft dough is reached. Knead
for several minutes. Let rest for 5 minutes. Add the raisins and knead for an additional 5 minutes.

Lightly spray a large bowl with cooking spray. Place dough in the bowl and cover. Let sit in a warn spot for 60 minutes.

Divide the dough into thirds and fold each piece over itself. Cover and let rest for 5-10 minutes. Roll each piece into 12 inch long
ropes. Braid the ropes together and tuck the ends under. Place on a cookie sheet lined with parchment paper. Spray some plastic wrap
with cooking spray and place over the braid. Let rest for 45 minutes.

In a large bowl whip the cream cheese until light and fluffy. Add the whipping cream and confectioners sugar. Whip until the mixture has
become slightly firm. Stir in the vanilla. Refrigerate until set.

Slice bread into at least 20 slices. Put 2-3 tablespoons of filling on each of 10 slices. Top with remaining slices of bread.

In a pie plate combine the eggs, cream and cinnamon. Whisk until everything is incorporated well.

Over medium heat in a large frying pan melt butter. Dip stuffed french toast sandwiches into the egg mixture. Let sit for 30 seconds and
then turn. Let other side sit in the egg mixture for 30 seconds. Put the stuffed french toast into the frying pan and cook until lightly
browned on the first side (2-3 minutes). Turn and brown the other side (2-3 minutes). Transfer to cookie sheet and place in oven for at
least 5 minutes to make sure the center is cooked. Serve with strawberries and maple syrup.