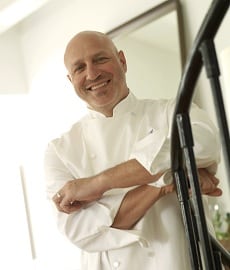 Stay with us at our Charlottesville bed and breakfast on Sunday March 18th before you head off to see Tom Colicchio at the Paramount Theater.  More recently known for his head judge role on Bravo’s Emmy award winning Top Chef he is known in the culinary world for his restaurants.  He is the chef/owner of Craft restaurants – Colicchio & Sons, Craftbar, Craftsteak, Riverpark, & ‘Wichcraft .  His most recent restaurant was opened in October of 2012 – Riverpark.

While being the Top Chef head judge he also spends time mentoring the up-and-coming chefs on the show.  To Chef is in it’s ninth season.  Watch him here on Charlie Rose.

Tom Colicchio spent his childhood immersed in food, cooking with his mother and grandmother.  It was his father, however, who suggested that he make a career of it. Tom taught himself to cook with the help of Jacques Pépin’s legendary illustrated manuals on French cooking, La Technique and La Méthode.  Throughout his career Chef Colicchio has earned awards for his cooking – including the James Beard Foundation’s Best Chef-New York.

If you are lucky enough to be in Charlottesville for Chef Colicchio’s appearance at the Paramount Theater and at the Commonwealth Restaurant & Skybar after party you should make a night of it and stay with us at Foxfield Inn.  At breakfast the morning we can talk about the performance and meeting him in person.

Dan and Kathryn Bundy, your innkeepers at Foxfield Inn