Well Christmas is now past. The snow is melting but we’ve gotten some pictures for you to see what it was like before Christmas. 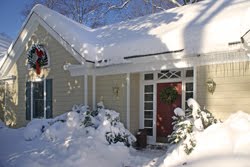 The previous post talks about the snow that we had here at Foxfield Inn in Charlottesville VA. Over 2 feet accumulated in a relatively short time period. It was absolutely gorgeous! It’s been almost a week and we still have snow on the ground although it is melting at a fast pace. While it melts we should take some time to remember what it looked like on that first day.

The fishpond – always a delight for our guests to look at was snow and ice bound. The fish were safely tucked in amongst the seaweed and have survived the snow – they quasi-hibernate during the winter so all was well with them even though we couldn’t see them. Our Heron statue that protects the fish pond was covered with snow. 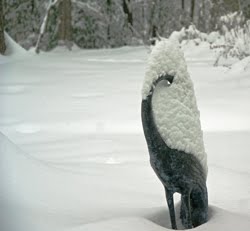 Even though there was a lot of snow everyone managed to get away safely. The first couple were able to plow through the snow as seen in the photo but two favored guests did need to stay a bit longer than originally planned as their car did not have enough clearance to drive safely back to Ohio. After much shoveling they got on their way.